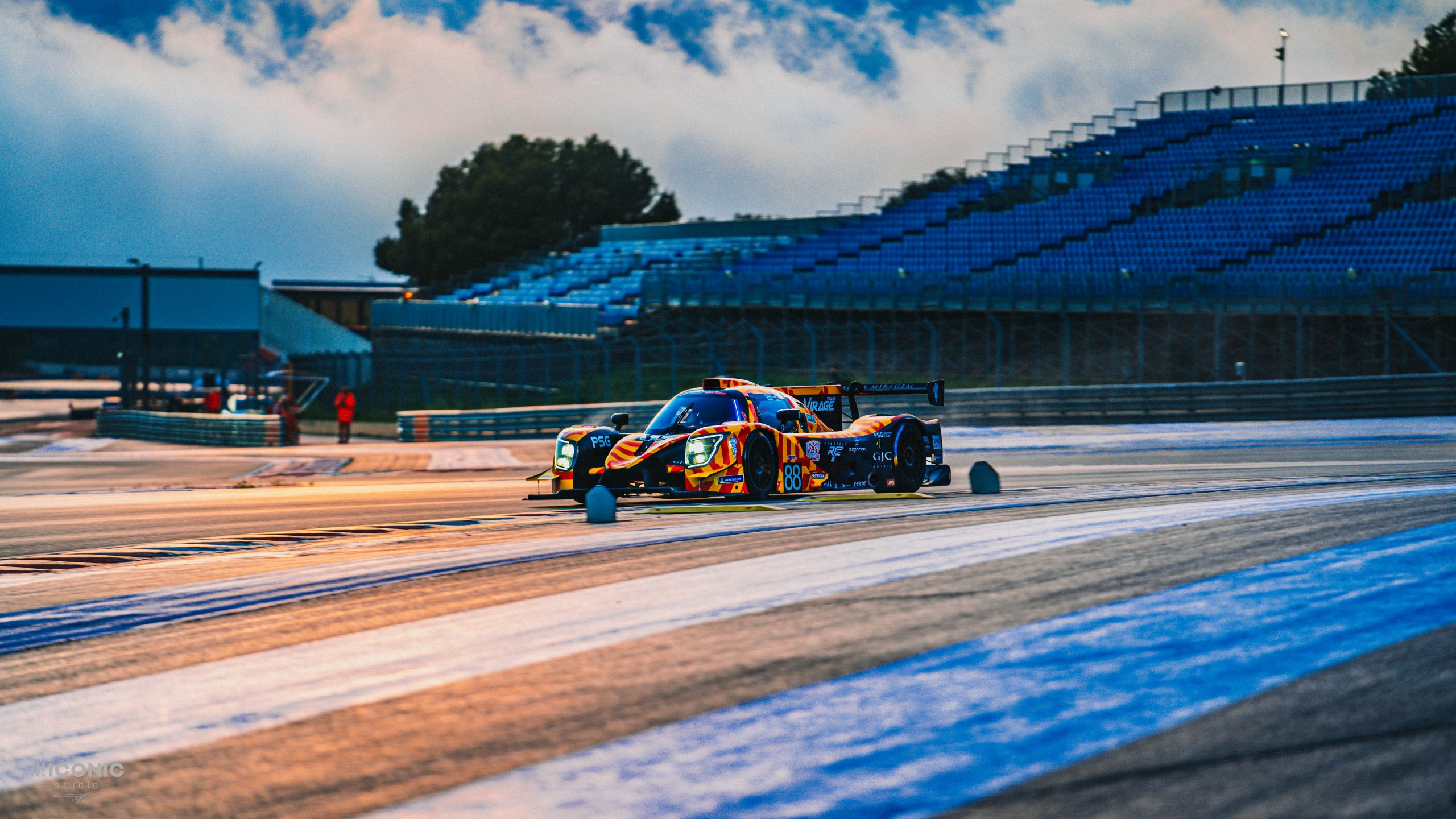 Returning as reigning champions, Team Virage entered the 2021 Ultimate Cup Series season with two Ligier JS P320. The #88 saw the return of Julian Wagg and Miguel Cristóvão who were joined by LMP3 debutant Mathis Poulet. The #77 was driven by Pontus Fredricsson and Stéphane Adler.

As early as the first practice sessions, the team proved its speed and pace. This was consolidated during the qualifying session which took place in wet conditions, where #88 claimed the pole position and #77 scored the 3rd fastest laptime. Due to the heavy rain falling on the circuit at the early stages of the race, the start was given behind the safety car, which allowed the team to pit both cars early and serve their first handicap pitstop. Thanks to this strategy, both of our cars would gain a significant advantage towards the end of the race.

After a positive first stint, Miguel Cristóvão passed the wheel to Mathis Poulet, making convincing LMP3 debuts in night conditions coming back in 2nd place behind the leader who was yet to take their handicap stops. With one hour to go in the race, Julian Wagg took the wheel for the last stint and brought the #88 car to the win thanks to a faultless drive.

Despite a puncture towards the end of his stint, Stéphane Adler also made a positive comeback in prototype racing, showing good pace behind the wheel of the Ligier #77. When Pontus Fredricsson took his place halfway through the race, he came back in the battle with the #41 for second place before eventually having to settle for 3rd, scoring a double podium for the team.

Miguel Cristóvão, driver #88: “Track conditions were difficult during the race but the strategy of the team was perfect. When you push and always believe in victory, the results come. Thanks to a great team, we achieved a great result for this opening race.”

Mathis Poulet, driver #88: “The race was very good. Thanks to the strategy, I jumped in the car with a big advantage compared to our opponents. My stint was quite good as it was also my first time in the night with that car. After the refuelling, which was another first for me, I struggled a bit with the tyres as the track was starting to dry. But overall I am very happy with my stint and I know where to improve to get even stronger in the future. Both of my teammates did a very good job and the team did a great strategy to allow us to win. I am very happy to be a part of this team, it is a pleasure to be here.”

Julian Wagg, driver #88: “Mathis and Miguel did an awesome job all weekend, they never put a foot wrong. Of course, kudos to all the guys and girls of Team Virage. They were flawless, be it working on the car, on the pitwall or at the pitstops. They have been working really hard for the last few months. They really deserved this win!”

Stéphane Adler, driver #77: “Driving conditions during the race were tough but the set-up of the car was perfect. I had not been racing in prototype since last June so it took me some time to get back into the rhythm but I eventually avoided any mistake before giving the wheel to Pontus. I think we finish in the lead lap, which makes the result frustrating because of the puncture I had. It was still a good race for us. The preparation of the car was on point, and the mood in the team is very pleasant. Team Virage has a bright future ahead of them thanks to its skilled, attentive and fun staff. The will to win is strong in the team and it is extremely motivating.”

Julien Gerbi, Team Manager : “This first 2021 Ultimate Cup Series event has been very positive for us. The pace of all the drivers were strong, and despite a puncture on the #77, we were really happy to celebrate the team’s second double podium in its history. We have had a tough few weeks before this race with the last part of the winter testing program and the ELMS and Le Mans Cup races, and both Philippe and I are extremely happy about the faultless performance of each and every member of the team during this week-end. This result is the perfect representation of a team’s success.”

The next race in Ultimate Cup Series will be close to a home race for Team Virage as it will take place in Motorland Aragon on June 25-27.

This website uses cookies to improve your experience while you navigate through the website. Out of these, the cookies that are categorized as necessary are stored on your browser as they are essential for the working of basic functionalities of the website. We also use third-party cookies that help us analyze and understand how you use this website. These cookies will be stored in your browser only with your consent. You also have the option to opt-out of these cookies. But opting out of some of these cookies may affect your browsing experience.
Necessary Always Enabled

Performance cookies are used to understand and analyze the key performance indexes of the website which helps in delivering a better user experience for the visitors.

Analytical cookies are used to understand how visitors interact with the website. These cookies help provide information on metrics the number of visitors, bounce rate, traffic source, etc.

Advertisement cookies are used to provide visitors with relevant ads and marketing campaigns. These cookies track visitors across websites and collect information to provide customized ads.

Other uncategorized cookies are those that are being analyzed and have not been classified into a category as yet.