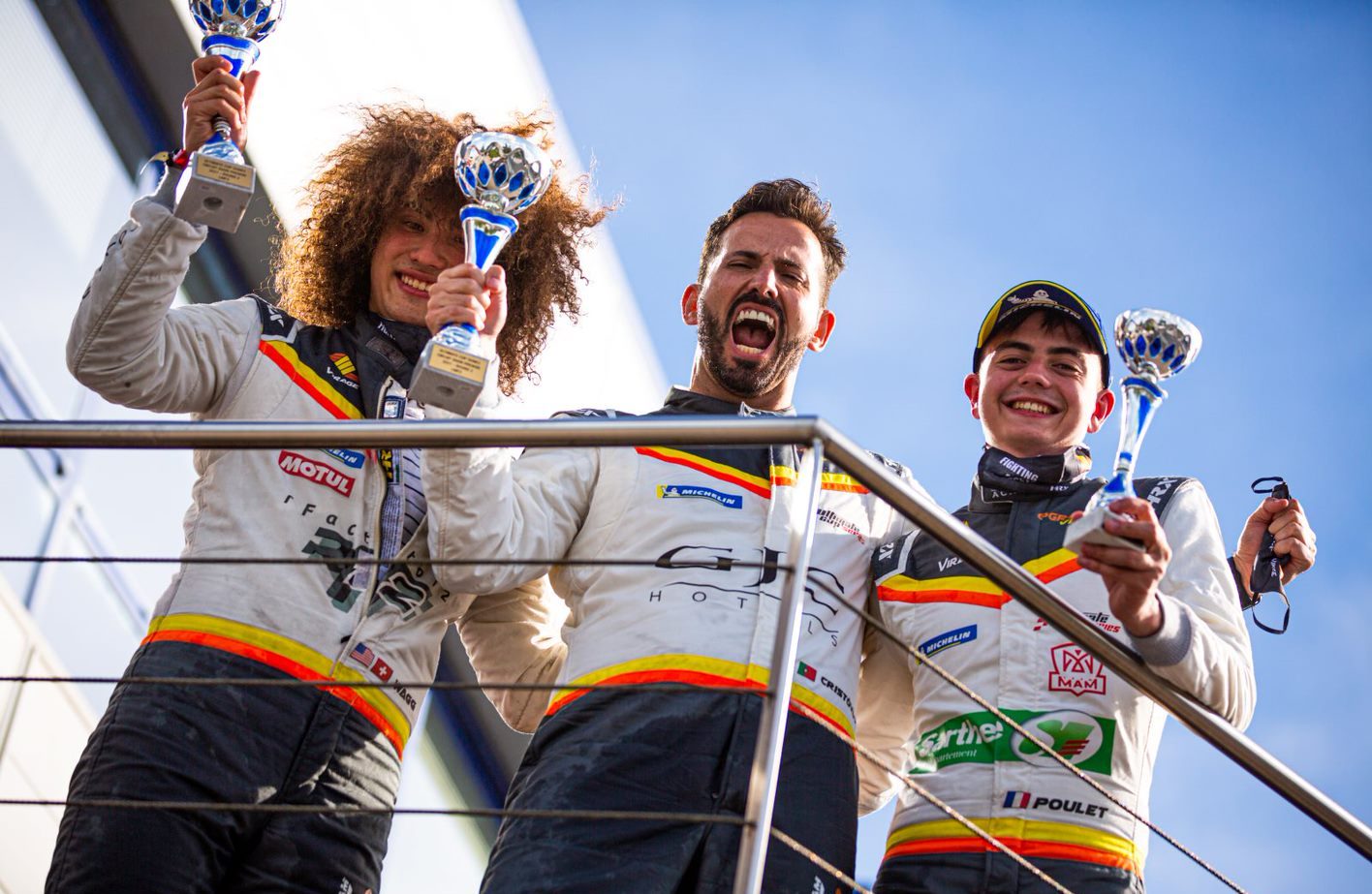 Thanks to a faultless week-end in Ultimate Cup Series, Team Virage increases its championship lead with another victory for its #88 car (Cristóvão-Wagg-Poulet) and another podium for the #77 car (Fredricsson-Padovani).

The week-end started with a slight change to the first drivers line-up car as Thomas Padovani joined Pontus Fredricsson on the #77 Ligier JS P320.

After successful private testing sessions both in wet and dry conditions, the line-up of the #88 car, Miguel Cristovao, Julian Wagg and Mathis Poulet, claimed their second pole position in a row by over a second upon their direct opponents, the fastest lap overall having been scored by Mathis. The #77 started the race in 4th place.

Despite a set back at the start of the race, Miguel Cristóvão managed to come back close to the leader of the race during his stint before handing the wheel to Julian Wagg. The young Swiss then took the lead on track and increased his advantage, also scoring the race’s fastest lap before handing the car to Mathis for the last stint. Despite two late safety cars, the 17-year old Frenchman did not break under the pressure of his closest opponent and brought the #88 to score a second victory after Paul Ricard.

The #77 had a more eventful race. After a great start, Thomas Padovani was victim of a contact with a concurrent which forced him to pit in order to change a severely punctured tyre. After one hour, Pontus Fredricsson took the wheel and proved himself to be one of the fastest man on track, managing to reduce the gap with the field. Thanks to the strategy under the safety car, Thomas Padovani started his final stint back in the lead of the race before having to serve a drive-through penalty making him loose the 2nd place. He still brought the car home in 3rd place only 15 seconds behind the race winner and scoring a second podium for the #77.

Mathis Poulet, driver #88: ”Superb weekend here in Dijon. The team did a remarkable job to allow us to cross the line in first place. It was an incredible joy to take the last stint and cross the line in that position. I would like to thank all Team Virage and my teammates, Julian Wagg and Miguel Cristóvão for the work done this weekend.”

Julian Wagg, driver #88: “Like a clockwork, everything just ran impeccably this weekend. I do not really know how else to describe. My stint was mostly about taking back the lead as well as managing the tyres for Mathis’ stint. The team as well as my teammates did a really good job all weekend long.”

Miguel Cristóvão, driver #88: “Great race with a fantastic result! I didn’t start well and los three positions, which forced me to recover. I gained places and got back to second place and matched the leader’s pace, which was crucial for Julian to take the lead in his stint. It was a great team effort which demonstrates how united we are.”

Thomas Padovani, driver #77: “It has been a very positive weekend for me. I am happy to return to Philippe, Julien and the other drivers. Team Virage have made a huge step up in its evolution and professional working environment. The switch from GT to prototype has been tough and it took me some time to adapt to the aero of the car. My teammate, Pontus, has been really impressive all weekend.”

Julien Gerbi, Team Manager: “Dijon has always been nice to us, as we have stepped on the podium at every race of our history there. This time, we came so close to a 1-2. All drivers did a very good job on and off track and we have proven the competitiveness of our cars. The #88 extended its championship lead, and we are a bit bittered for Pontus and Thomas as they really had the pace to fight for the win as well if not for this puncture. But their time will come and we are already looking forward to the next race in Le Castellet.”

For the 3rd round of the season, the Ultimate Cup Series will return to Paul Ricard in its Grand Prix configuration on July 16th.