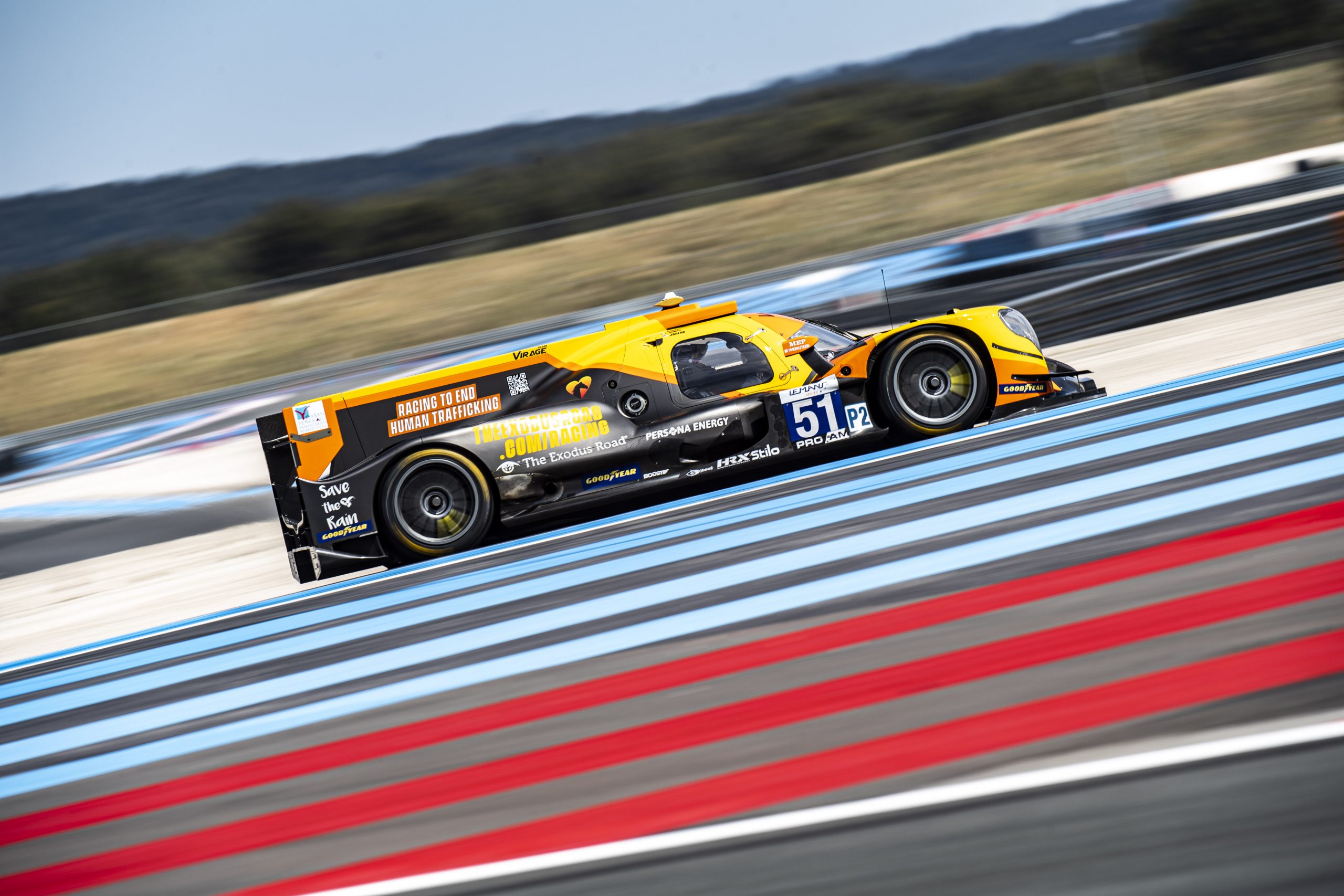 Team Virage and Rob Hodes, an LMP3 driver joining the LMP2 ranks for the first time this
year, are racing in the Pro Am division of the European Le Mans Series and Michelin Le Mans
Cup with cars wrapped with the logo of an anti-trafficking nonprofit, The Exodus Road.

Colorado Springs, CO. (May 10, 2022) – Days away from the 4 Hours of Imola race in Italy, Rob
Hodes, an LMP3 driver joining the LMP2 ranks for the first time this year, is using his platform to
raise awareness for the fight to end human trafficking around the world. Hodes decided to donate
his car’s advertising space to the anti-trafficking nonprofit, The Exodus Road. After visiting Thailand
several years ago and seeing children and young women on the streets being offered to tourists for
sex, Hodes felt deeply disturbed, he said. He eventually connected with The Exodus Road in 2020.
“Thinking about any human being, let alone a woman or child, being enslaved and violated crushes
my soul,” Hodes said. His cousin found The Exodus Road online while helping him search for antitrafficking
nonprofits. The Exodus Road combats human trafficking in Thailand and five other
countries through on-the-ground search and rescue with local police, training and education, and
aftercare services for survivors.

After connecting with the organization’s founders, Hodes quickly became a financial supporter. And
now, he is using his racing platform to raise awareness for the movement. Team Virage has joined
him.

“Awareness on all levels can only accelerate intolerance for human trafficking and lead to the
freedom of victims,” Hodes said. “I’ve felt an urgency to do something to stop human trafficking for
a very long time, and I’m excited to help further the critical work of The Exodus Road.”
“We are deeply grateful for the advocacy work of Team Virage this season. It’s an innovative,
exciting move to leverage a race car on the global stage on behalf of this issue,” said Laura Parker,
CEO of The Exodus Road. “The first step to fighting human trafficking is for people to understand it,
and that’s exactly what this type of project will push forward.”

Hodes is racing as an LMP2 entry in the Pro/Am division of the European Le Mans Series (ELMS);
LMP2 is the top class. He is racing with two other drivers, Gabriel Aubry and Jazeman Jaafar, for
Team Virage. The second race in the series takes place on May 15 in Imola, Italy.

“The Exodus Road, Rob Hodes and Team Virage are at the birth of a brand-new kind of challenge,”
said Julien Gerbi, the team manager for Virage Racing Group. “We share common values of
perseverance, discipline and the will to progress, and having the European Le Mans Series LMP2 car
as a platform to promote the excellent work of The Exodus Road will certainly raise more
awareness on the terrible human trafficking situation that all countries face today.”

The European Le Mans Series features six races that take place in five different countries – France,
Italy, Spain, Belgium and Portugal – from April to June. The races are live broadcasted on YouTube
and Facebook. At the end of the ELMS title race, six invitations are awarded to drivers giving them
the opportunity to enter in the 24 Hours of Le Mans, according to the ELMS Instagram page.
When asked why the racing community should care about this global crisis, Hodes said:
Racing is the ultimate freedom. It is a high profile, high octane, fast-paced lifestyle fueled by
creativity and resourcefulness that reaches communities around the world as we travel from
track to track. It only makes sense that the racing community take a stand. Collectively, we
have immense influence, resources and networks to fuel the end of this atrocity. I hope
whenever someone sees the message on the Team Virage car, the speed of the car will
symbolize an urgency to quickly free the most vulnerable of people trapped in the dark
prison of human trafficking. If we choose to ignore the suffering of over 40 million victims –
the majority of which are women and children – we devalue humanity as a whole.
The car not only features The Exodus Road logo and “Race to End Human Trafficking,” it also
contains a QR code which leads directly to a page full of educational resources for visitors. Team
Virage hopes that racing fans will visit the page, learn about the issue, and be inspired to take action
to help make a free world.

About The Exodus Road
The Exodus Road is a global nonprofit disrupting the darkness of modern-day slavery by partnering
with law enforcement to fight human-trafficking crime, equipping communities to protect the
vulnerable and empowering survivors as they walk into freedom. Working side-by-side with local
staff, NGO partners and law enforcement around the world, The Exodus Road fights to liberate
trafficked individuals, arrest traffickers and provide restorative care for survivors. Since its
founding in 2012, the organization has assisted police in the rescue of more than 1560 survivors
and the arrests of 870 offenders; numbers that grow almost daily. The Exodus Road’s approach to
freedom incorporates prevention and training efforts (TraffickWatch Academy), intervention
(Search + Rescue) and aftercare (Beyond Rescue).

In September 2021, The Exodus Road launched TraffickWatch Academy: U.S., a free, online,
multimedia training module that unpacks the complexities of human trafficking and educates
viewers with methods for identifying signs of trafficking and how to intervene. The organization is
also launching a similar training throughout Brazil designed specifically for law enforcement
partners. In November, the nonprofit opened Freedom Home in Thailand to house survivors of
human trafficking and sexual exploitation. The Exodus Road combats human trafficking in the U.S.,
Thailand, the Philippines, India, Brazil and in another Latin American country, undisclosed for
security reasons.

Virage close to its first victory at Navarra

Impressive work of Team Virage during the 24hrs of Barcelona